Here at Cireson we work hard to breed internal and external innovation. Today, I would like to give you a sneak peak at our Survey App that started as Internal project with the purpose of boosting External innovation, and based on the interest we saw became something even more.

Later this month we will be releasing our ‘Survey App’, a web based application built on the Cireson Portal using Service Manager as the data back end, through our Release Candidate Testing Program. In a second I’ll briefly discuss how it works, and why it’s an example of what any custom can do with the Cireson Portal and Service Manager. I’ll also give you a few sneak peak screenshots of what’s coming…

The Survey App started as a personal project of mine, primarily as a proof of concept for a request we had from a customer. What they were asking for was pretty intense and we hadn’t done anything like it yet, but I felt it was possible and wanted to prove to myself that it was. Thus, with my wife away for a girls weekend, I worked into the early morning for two nights to make it a reality.

That was the first version of the Survey App and we gave a demonstration and sneak peak of that back in October at Cireson Innovate 15. There were a few features that were requested though that I ran into some substantial problems with, so I delayed the release and ended up doing a complete rebuild. This time really pushing the limits of what the portal can do.

What I ended up with is an application within an application. The new Survey App is built on AngularJS, leveraging the power of the Cireson Portal API and using Service Manager as a database and authentication tool. It’s flexible, it’s fast, and it works.

The real point here though that I want to make is that everything is done in a supportable manner and it is NOT built into the Cireson Portal base code. This is a plugin in nature, and is completely customizable. The entire solution is built using both Cireson and Microsoft best practices for the Portal and Service Manager.

On the Service Manager side it uses custom CI classes, and workflows. On the Portal side the entire application sits within the CustomSpace folder and is installed through a single SQL command.

The application allows for the creation of Survey Templates, that can then be presented to end users in a number of ways. Initially, it allows for users to take a survey on demand, in the work item form, and via a specific URL. We’ve already had additional requests for criteria based, automated, survey assignment.

From the users perspective there is a MySurveys screen that shows any incomplete surveys they’ve been assigned, as well as a method to who past surveys. It also gives them the ability to take a survey.

In regards to completing a survey, it’s a single screen regardless of the number of questions and we support 6 question types, 4 of which are quantitative and reports are built for you automatically. 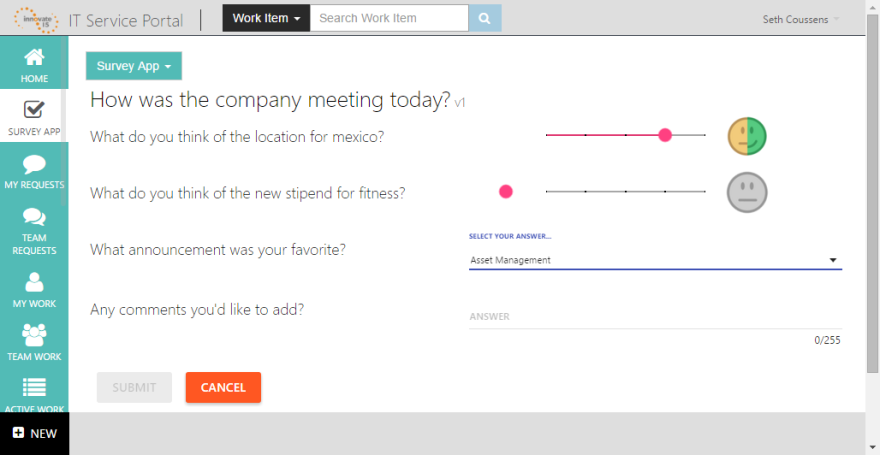 Once the survey has been completed by the user it will be picked up by the system and incorporated into the results within only a few minutes. 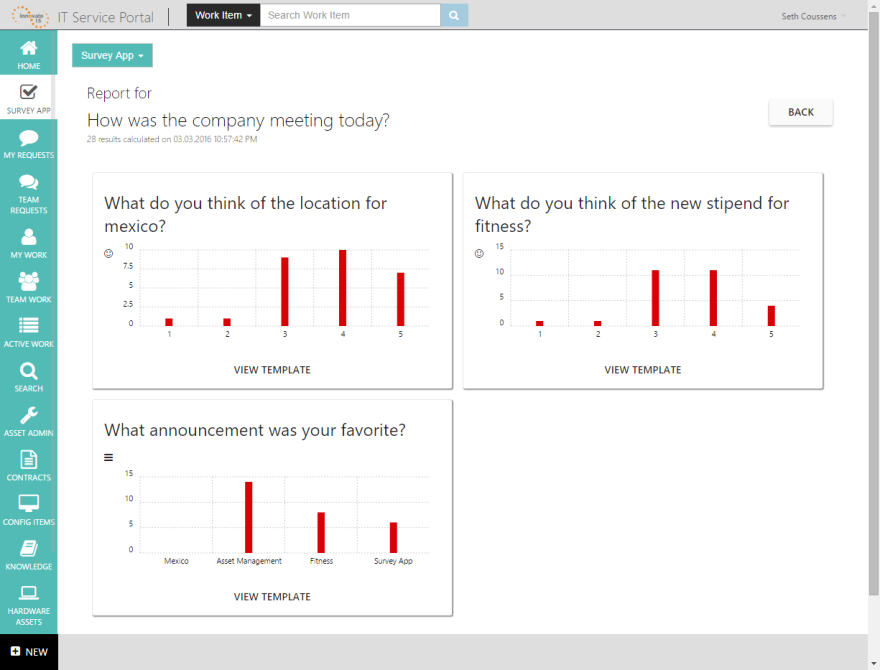 Overall, this add-in provides you with a quick and easy way to send surveys out to your end users using the Cireson Portal and Service Manager. It’s light weight, and flexible and customizable by our services team.

Most of all though, it’s a fantastic example of what can be done when you put the Cireson Portal on top of Service Manager. Really the sky is the limit and it comes down only, to the skills you have in place and what you can dream up. One of those we can help you with our CCS team, and the other is entirely up to you!

If you are a current Cireson Customer and are interested in being a part of the Release Candidate testing program you can sign up here: http://1drv.ms/1WpGfwY